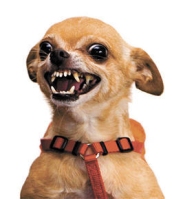 Casey Luskin, the Discoveryless Institute’s resident attack chihuahua, is on a roll. This time he’s gone off on a tangent about a recent find of yet another dinosaur fossil with evidence of protofeathers, Sciurumimus albersdoerferi and dinosaur evolution in general.

Luskin: The media that loyally serve Big Science are at it again, overstating the finds of a scientific paper to promote an evolutionary icon. This time, the icon is feathered dinosaurs, representing the purported ancestral relationship between dinos and birds. (Luskin 2012)

Ah, if only. If only Mr. Luskin’s conspiratorial fantasy were true and the media was that on the ball. The fact of the matter is that defenders of science education like me often cringe at the mischaracterizations and overstatements that come out of the popular media regarding evolution. I am constantly shaking my head and yelling at the TV or radio “no, that’s not what that means at all”, or words to that effect.

I wish I had a nickel (because being underemployed I could really use the money) for every time a silly reporter, while talking about some fossil discovery, described it as “overthrowing everything we thought we knew about the evolution of X”.

That is absolute bollocks, 99% of the time.