Dr. John Morris, president of the Institute for Creation Research is at it again. Apparently not content with advertising his abject ignorance of zoology as he did a few months ago when he listed tunicates (phylum chordata) along with sea stars as members of the phylum echinodermata, he is now letting everyone know that he is equally incompetent to comment intelligently on the subject of paleontology (I know, I am as shocked as you are).

More specifically he has come out attacking the classic fossil evidence for the evolution of the horse in the September (2008) issue of ICR’s Acts & Facts.

Morris: Horse evolution prominently appears in textbooks as a supreme example of the evolution of one body style into another. All students remember the “horse series” sketches, tracing the development of a small browser named Hyracotherium (formerly known as Eohippus) with four toes on the front feet and three on the rear, into the large one-toed horse of today. Intermediate steps included the three-toed Mesohippus, a modified horse with one toe touching the ground… [Emphasis mine] 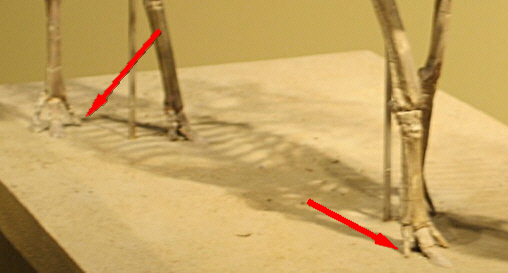 Wrong right off the bat. The fact is that with Mesohippus all three toes touch the ground as can be seen in the above photo of a mounted fossil at the Chicago Field Museum. This is especially true when it is taken into account that Mesohippus probably would have had pads on its feet similar to those found in tapirs.