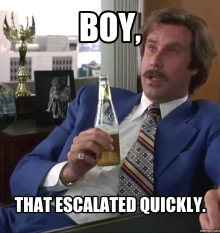 So, the Institute for Creation Research put up a link on their Facebook page to one of their latest Acts & Facts articles on the whole Ernst Haeckel/vertebrate embryos thing and since the sort of stuff creationists write about this subject is a pet peeve of mine (as readers of this blog will no doubt have gathered) I decided to post a quick comment on the following quote from the article:

Guliuzza: Shouldn’t students be skeptical when they’re told that evolutionists can simply look at folds in embryos and see gill slits? The truth is that these are only folds of tissue in the pharynx region of vertebrates during the pharyngula stage of development. For mammals, birds, and reptiles, they never develop into a structure that is in any way like fish gills.

I wrote that this statement was not true as would be known to anyone who had cracked an embryology textbook and asked if Dr. Guliuzza (the author of the article) was therefore incompetent in this area or if he was being deliberately misleading. Further I provided a link to my blog post on the subject of “gill slits” so that anyone interested could look at the evidence for themselves.

I also corrected one of their other commenters on what Thomas Huxley and Charles Lyell’s professions and religious perspectives were. I also noted to the commenter that all science, not just evolutionary biology, leaves God and other supernatural agents out of its explanations.

I used no harsh language, I did not call anyone any names and I engaged in no mockery (unless you count my pointed question about Guliuzza competency/honesty) and yet the end result was that my link and all my comments have been deleted and I am apparently now blocked from commenting on ICR’s FB page.

I’ll leave the reader to decide what this says about ICR and the robustness of their scholarship.