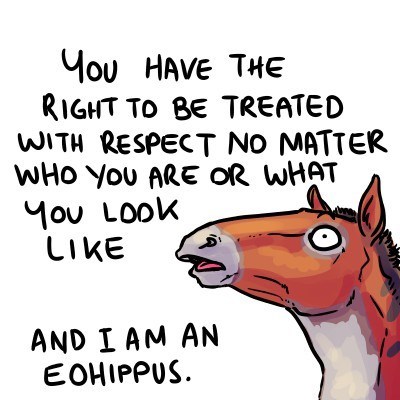 I am going to give another wag of the finger, this time to Scientific American. They posted a number of paintings of reconstructions of various extinct “horses” in a picture gallery titled “Ancient Miniature Horses”, which includes an entry for the famous “dawn horse”, Hyracotherium.

However, the problems lies not in the painting, which is probably a reasonable guesstimate of what Hyracotherium might have looked like in life but rather with the blurb of information included with the painting:

Hyracotherium This genus of small early horse roamed the early woodlands of Asia, Europe and North America some 55 million to 45 million years ago. It was already larger than Sifrhippus, weighing about 22.7 kilograms. But when Richard Owen first discovered Hyracotherium in 1876, it was so diminutive that he thought it was some unknown hyrax species, a group of extant mammals that live in Africa and the Middle East.

No, no, no, a thousand times no! It is bad enough when creationists claim that Hyracotherium is merely a hyrax (rather than a ancestral horse) and claim that Richard Owen thought so as well but to have a venerable science publication like Scientific American falling into the same pit of misinformation is extremely vexing.

END_OF_DOCUMENT_TOKEN_TO_BE_REPLACED

A couple of years ago, after hearing that creationists had purchased Dinny the dinosaur and converted perverted him—and his sidekick Rex—into tools for peddling their rank ignorance, I went out to Cabazon to see for myself how badly they had been abused. What I found was not happy-making, nor would it be for anyone who cares about knowledge, science and truth, or who finds the thought of children being mislead distressing.

What I found was that Dinny had not only been taken hostage by creationists but judging by their posted material, creationists who seem to be enamored with the “teachings” of some of creationism’s lowest common denominators; professional hucksters such as (the felonious) “Dr.” Kent Hovind and “Dr.,” Carl Baugh, two people that even other young earth creationists (YEC) tend to distance themselves from.

Even worse they seemed to be doing fairly good business as they were in the process of expanding the attraction by adding a number of decently executed life size dinosaur models.

As I said that was two years ago. Last summer my wife Kathy and I happened to find ourselves not far from Cabazon and I figured we should swing by and see what new devilry might have befallen Dinny.

END_OF_DOCUMENT_TOKEN_TO_BE_REPLACED

OK, it took me a while to get to it but I am, as promised, responding to creationist Arthur Biele’s lengthy comments left in response to my criticisms of his writings on horse evolution. For those interested I suggest you go back and read Mr. Biele’s article and my original critique first. Those that do I think will find that his response didn’t really answer any of my original criticisms. Instead what he did was dump a new load of barely coherent nonsense on me.

A warning though, this goes on for quite a bit (it sure felt like it while I wrote it), which is of course due to the well known fact that accurately and substantially responding to horseshit takes considerably more time and effort than it does to spewing it.

Biele: With regard to Eohippus, If you knew anything about the actual fossil record, Eohippus finds are many and that category has been a dumping ground for certain archaic partial skulls that defy any specific classification, nor are they known to be ancestors of any known ‘evolved’ descendants, and they are mostly from Europe.

While apparently attempting to impugn my knowledge of the “the actual fossil record” Mr. Biele clearly demonstrates his own ignorance of the subject at hand. Let’s break this down in order:

END_OF_DOCUMENT_TOKEN_TO_BE_REPLACED

…the horse is of course the famous Eohippus.

One of my favorite corners of the alternate universe that is creationism is where creationists get to talking about (denying) horse evolution. The fossil record for horses and their relatives (rhinos, tapirs and some extinct groups) is so well documented it is amusing seeing how creationists rationalize their way around the evidence and when I find something about horses on a creationist site I often take a look to see what sort of silliness they’ve gotten up to.

Case in point: Answers in Genesis put up a short piece on their site recently titled “Not Just Horsin’ Around” which directs their readers to a site called “eQuest 4 Truth.com”. They report that the owner of the website (Rebekah Holt) started it to “… steer young people away from the incorrect information that they receive in many public school textbooks and encyclopedias” and that the site “…helps refute the claim that the modern horse evolved from a much smaller, non-horse ancestor.”

On the site is a page titled “Horse Evolution – Fact or Horse Manure?” written by creationist Arthur Biele, who, judging by a Google search on his name, has been pestering people with nonsense in various internet discussion forums for years. His article here attacking the evidence for horse evolution is a barely readable hodgepodge of unsupported assertions, factual errors and standard quotes from “The Creationist Joke Book™”.

Given that there is so much creationist nonsense out there on the web I normally wouldn’t have taken as much time as I did to dissect it but since Answers in Genesis put their seal of approval on it I figured it would be worth the time.

OK, we’re off to the Eohippus races…