P. Z. Myers, who lives in Minnesota,  posted a peice on his blog Pharyngula about a pro-animal testing/pro-science rally held at University California Los Angeles. In his post he included a link to a video of a local So. Cal. (where I live) TV news (KTLA) report on the rally.

But that isn’t the only thing that makes it a small world. What really does it is that at 1:06 into the video there is a shot of some of the Pro-Testers carrying a white banner that reads: 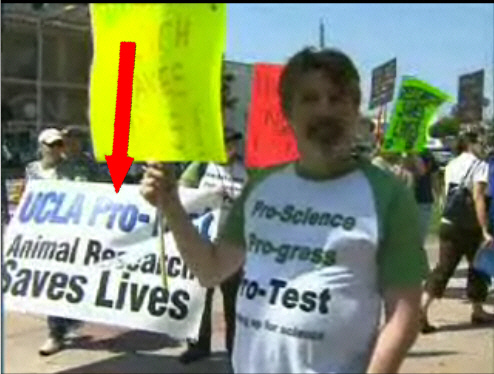 I helped to make that banner, two of them actually, at the print shop where I work last week and wondered what they were going to do with them.

So P. Z. in Minnesota, writes a blog that I happen to read regularly and in one of his posts he points his readers (including me) to a video  from a Southern California TV channel that has a shot of a banner I made a week ago.

Oh, and I agree with P. Z. and the Pro-Testers on the issue of animal testing.