I can’t believe I hadn’t heard about this already but apparently the infamous Jack Chick, author of those vile little sooo bad they’re almost good cartoon religious tacts that you would sometimes find stucked under a windshield wiper on your car, or laying in a parking lot after someone pulled it out from under their windshield wiper and threw it on the ground… Yeah those, died last Sunday (10-23-2016) at the age of 92.

There were so many “great” tracts, like Dark Dungeons that attacked the game Dungeons and Dragons and in which Chick claimed that D&D could lead you to practicing actual, for reals, black magic.

But of course for me the pièce de résistance was his antievolution tract, Big Daddy, wherein we read the story of an intrepid young creationist student who schools his teacher on how foolish and wrong evolution is, concluding with the teacher leaving head hung low in disgrace. Hilarious! 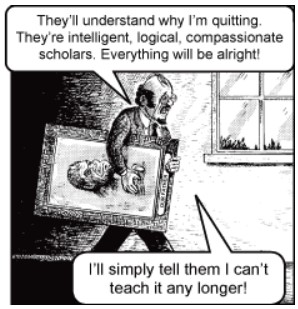 Ah well, bye Jack, Big Daddy will always hold a special place in my… in my… ah, well, bye Jack and my condolences to his loved ones.

One thought on “Jack Chick is dead…”