Just to show that I am an equal opportunity critic (proponents of mainstream science as well as pseudoscientists) I am going to give a wag of the finger to the Smithsonian Magazine.

The March 2010 issue has a feature article on human evolution that celebrates the opening of the Smithsonian Institutes new Hall of Human Origins titled “Our Earliest Ancestors” (Here is an online version) by Ann Gibbons. The problem, however, is not with the article per se but rather with some of the illustrations given in a timeline titled “Unearthing Our Roots” (Gibbons 2010, pp.36-37) which is found within the article.

The timeline gives the readers a brief outline of the history of paleoanthropology from the Neanderthal (Homo neanderthalensis) fossils discovered in German in 1856, to the more recent finds like those of Sahelanthropus tchadensis found at Chad in 2001. The first refers, as I said, to the 1856 Neanderthal find and includes what is supposed to be a picture of a Neanderthal. The second is the 1891 discovery of “Java Man” (Homo erectus) with a picture of a fairly compete skull of a H. erectus. 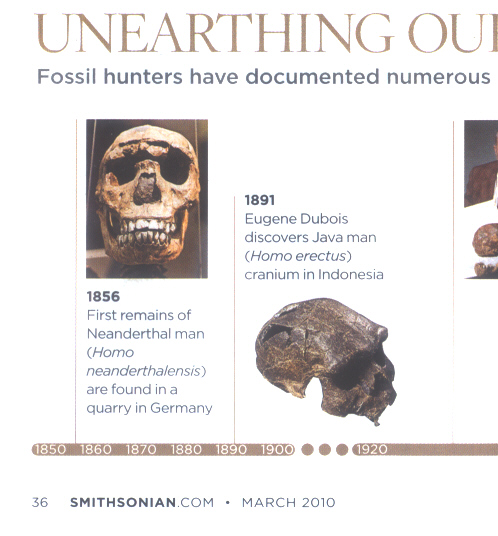 I’ll start with the second one first as it is slightly less of a blunder and indeed some might say I am being a little pedantic for pointing it out.

While the text refers to Eugene Dubois‘ 1891 discovery of “Java Man” in Indonesia, the picture instead seems (judging by the open space in the side of the skull and the lonely right canine), to be a later H. erectus find called Sangrian 17.

Again this is not too far off given that not only is it the same species as Dubois’ original find but it was also discovered in Indonesia; just 78 years later in 1969.  For comparison here is the actual fossil skull cap (Trinil 2) discovered by Dubois in 1891:

The more serious difficulty is the first spot in the timeline. The text here refers to the discovery of Neanderthal fossils in Germany in 1856. The problem is that the picture used to illustrate this is not in fact that of a Neanderthal but rather another fairly famous fossil of a Homo ergaster (or Homo erectus depending on who you’re listening to), KNM-WT 15000 also known as the “Turkana Boy”. Here is a picture of cast of the Turkana boy skeleton on display at the American Museum of Natural History:

Now here for comparison is a larger version of the picture printed in the magazine taken from the Smithsonian Magazines web version of the timeline (which is also inaccurately labeled as a Neanderthal). I’ve dropped in a red arrow pointing toward damage in the brow ridge and just below that the gap in the skull between the eyes, both identical to those seen in the AMNH cast  of KNM-WT 15000 pictured above. 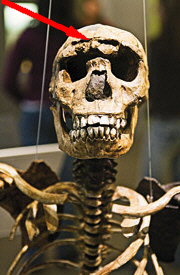 I’m afraid someone at the Smithsonian Magazine needs to double check their work.